The Fujifilm X-T3 Disassembly and Teardown 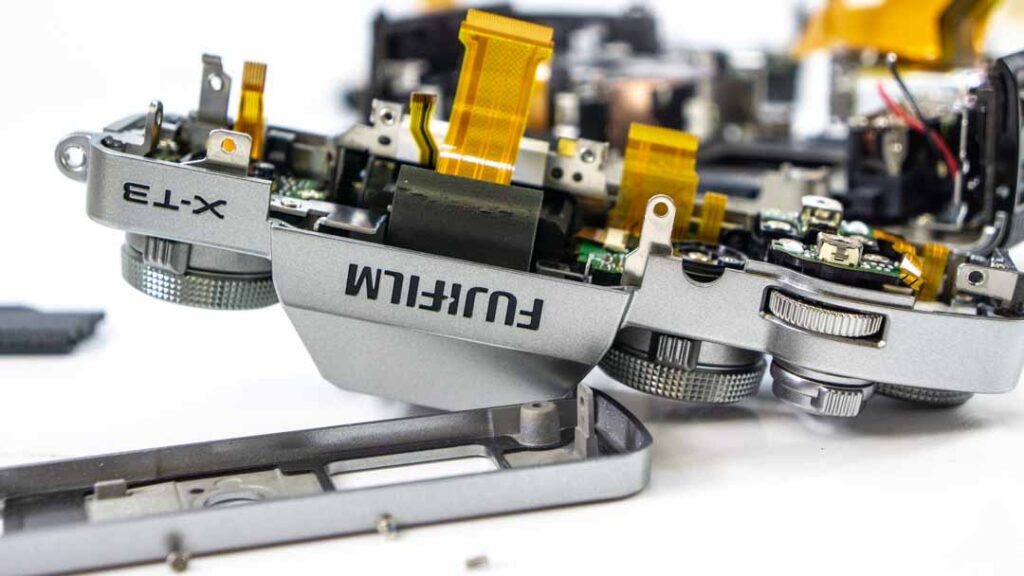 You might have thought the Fujifilm X-T series was finished with the release of the X-H1, that Fujifilm was digging into the competition and leaving their love of style behind as was evident with that monstrosity. (We mean that lovingly.) But, the X-T3 is here, and it’s as beautiful as ever. Not only that, but the X-T3 even outperforms the X-H1 in many areas as far as their spec sheets are concerned. Fujifilm’s approach to the mirrorless camera war of 2018-20?? is a two-pronged assault on the flanks. They’re releasing powerful cameras with APS-C and medium format sensors in multiple iterations while skipping full-frame entirely. Fuji’s alternative strategy is a very interesting pincer attack on the market, and we definitely shouldn’t count them out just because they’ve officially rejected full-frame. 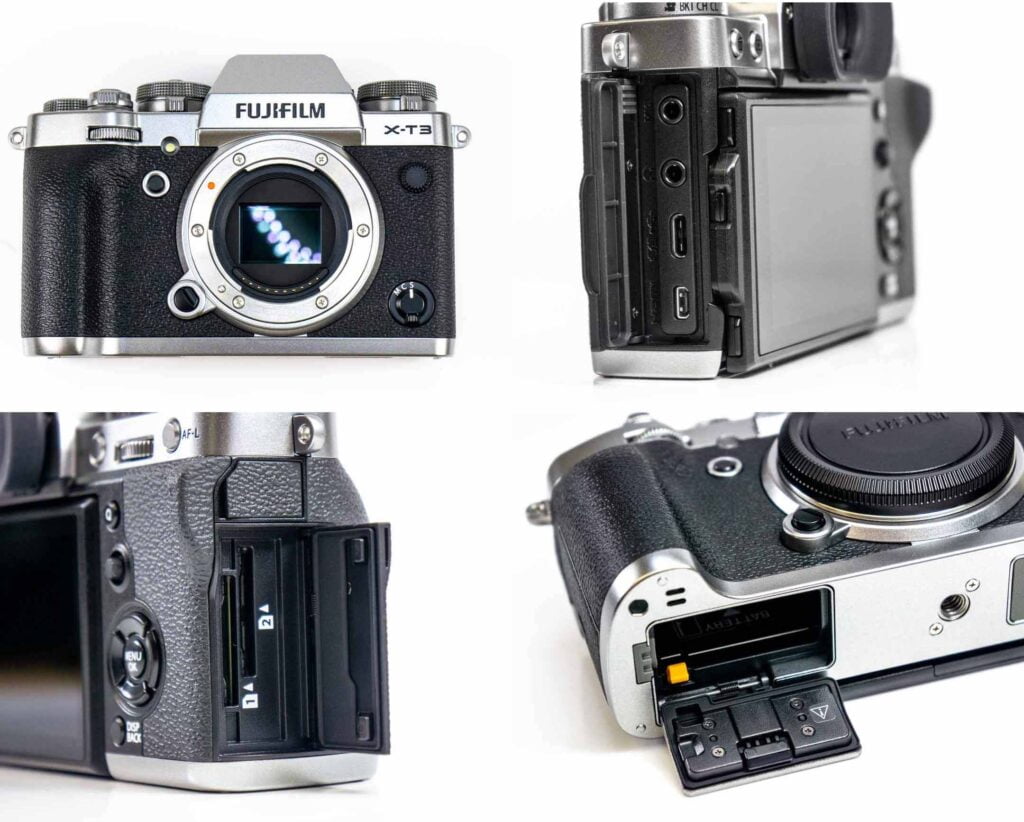 Aesthetically pleasing and minimally invasive, the X-T3 is an artist’s camera. Upon initial inspection of the retro chrome exterior, we found some fairly decent sealing around the ports and doors. The X-T3 clearly isn’t meant to go toe to toe with the full-frame workhorses in this arena, but it won’t be done in by a light sprinkling rain either. It’s solid yet lightweight, what we supposedly all want out of a mirrorless camera as opposed to the DSLR-with-an-EVF style form factor that is clearly the current fan favorite judging by Canon, Nikon, and Sony’s recent releases. 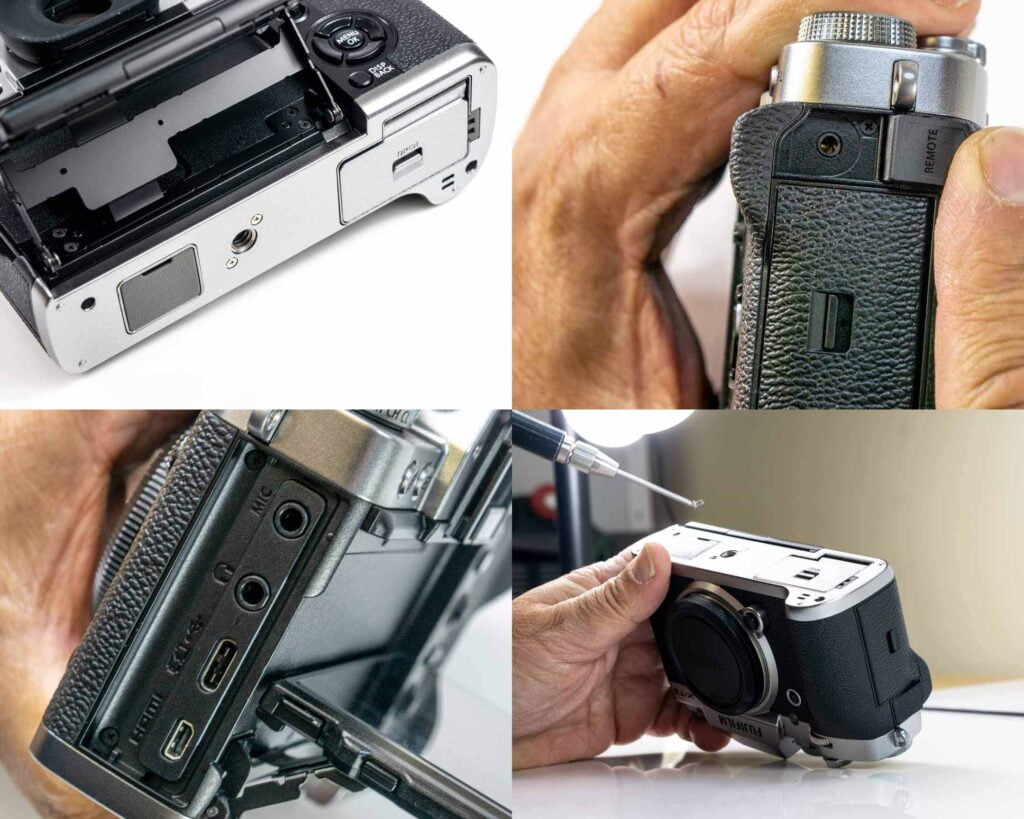 We begin by extracting the exterior screws. Fuji has a knack for hiding these. 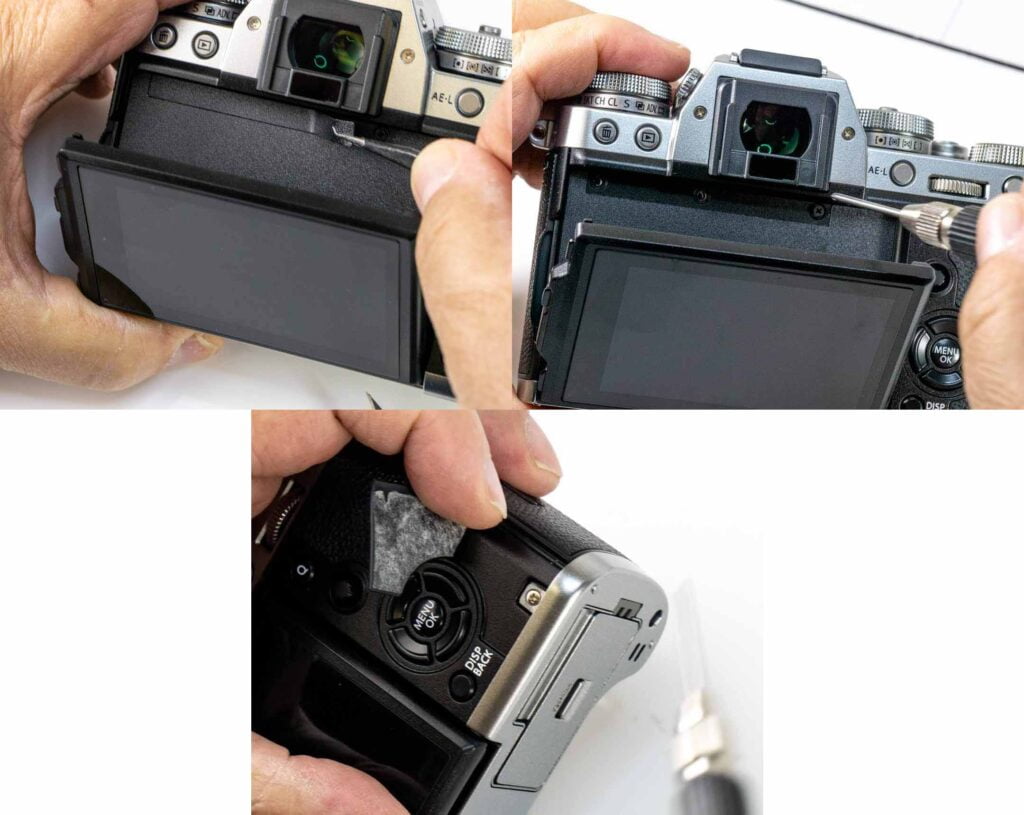 See what I’m talking about? They really make a game out of it.

Once you find them all, the bottom should budge off with some gentle prying. Here is where we start to notice the difference in sealing between this model and the more hardcore professional cameras we’ve been examining recently. The X-T3 obviously isn’t dressed for the Amazon.

From there, a few more screws come out and the back should come off, multi-angle articulating LCD included. We were met with a single motherboard with neatly aligned connectors and a surprising 11 soldered connections. That’s a lot more than the 0 soldered connections we’ve found on most recent releases.

Here are the solder points close up. All need to be desoldered to remove the board and access the sensor. 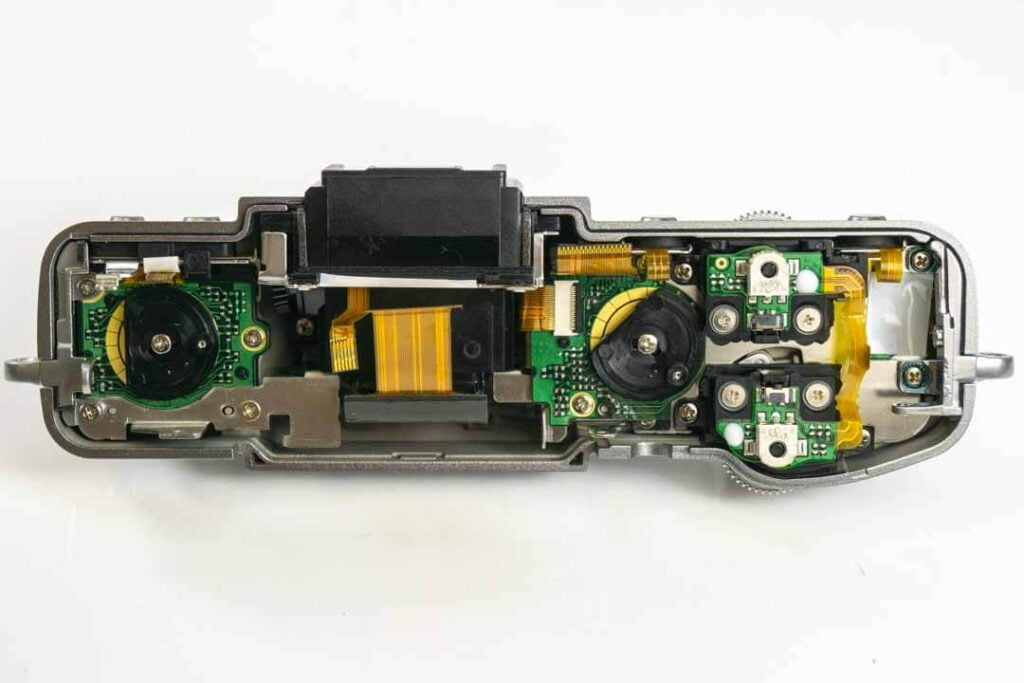 First, we’ll remove the top. Here is a good view of what all those beautiful dials look like from the inside. 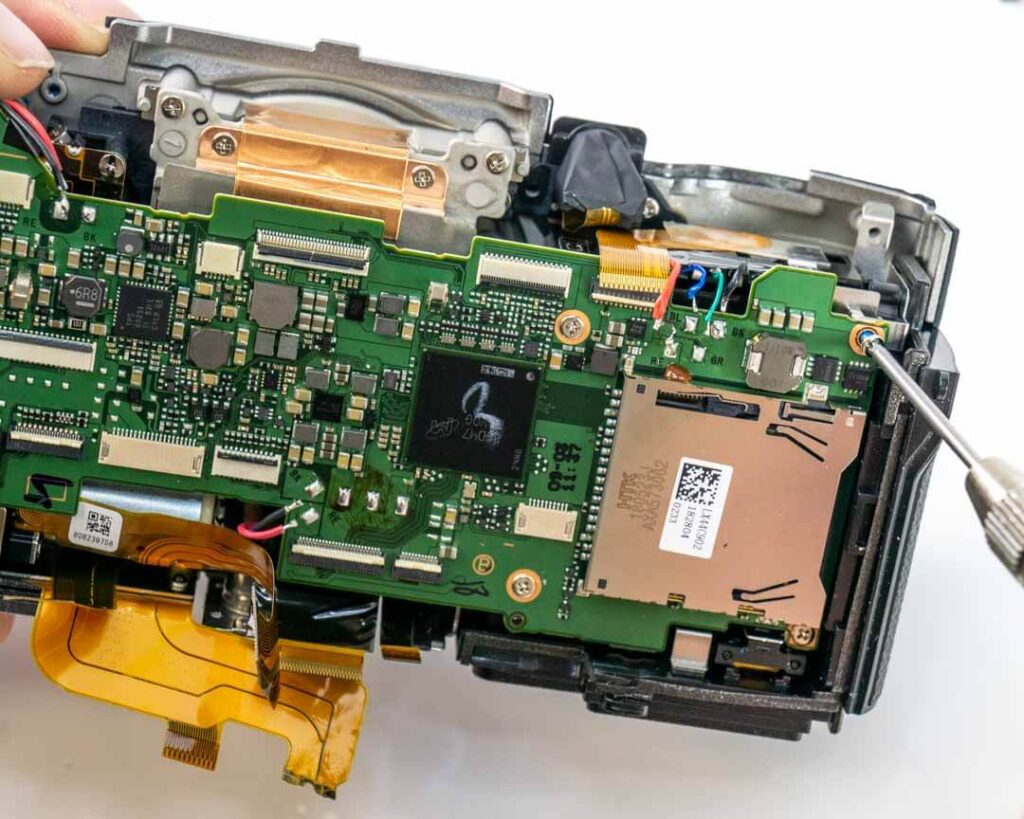 Once all soldered connections are separated, we can unscrew the board and pull it out. 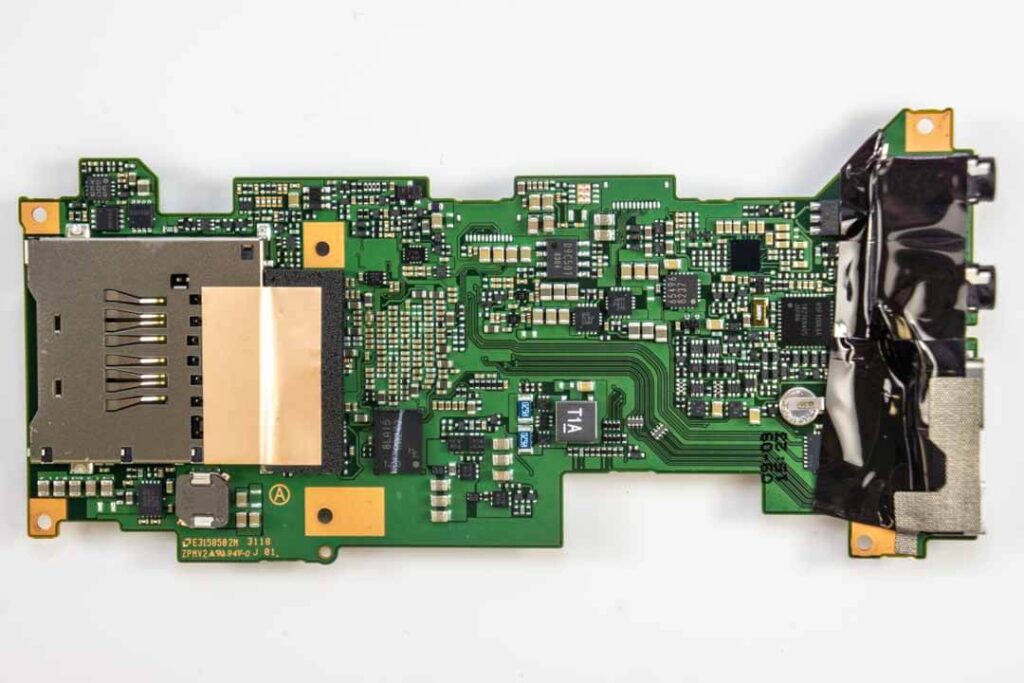 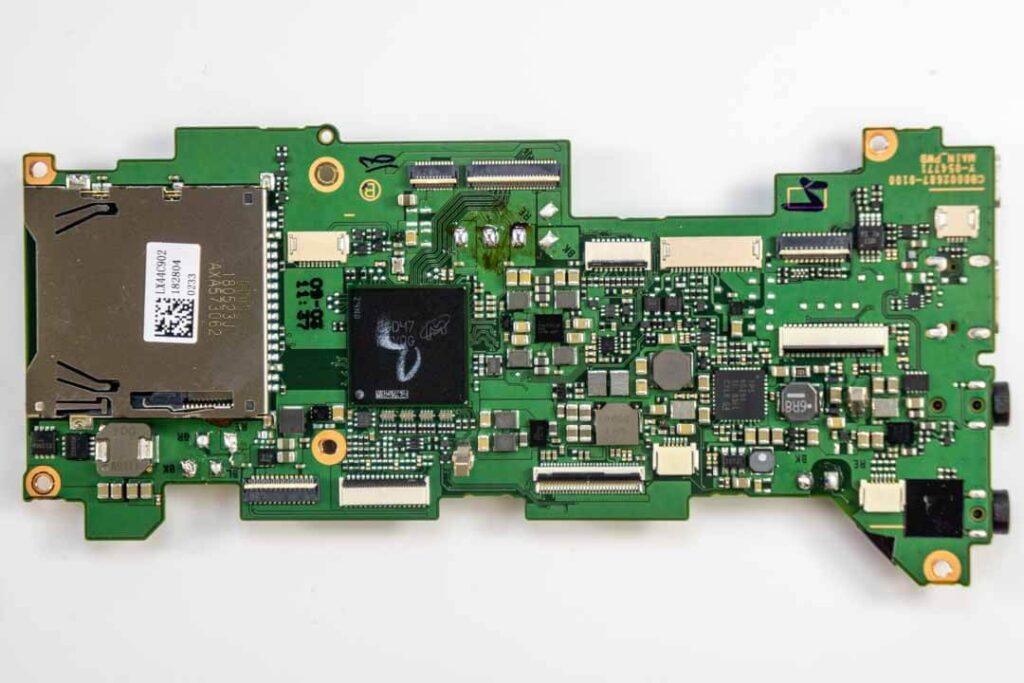 Motherboard: back. It’s easy to forget this camera has dual SD card slots when they’re this neatly arranged. Sony’s dual SD card slots on the A7R III are both crammed onto one side of the board and look like they’re at risk of falling off the edge. You can see for yourself here.

Now that the board is out, the sensor is still held in place by some copper tape, more screws, and a copper shield covered in heat-sinking material you can see near the center of the photo on the right. That piece makes lifting the sensor directly up from the body impossible.

The solution: lift up and to the left VERY CAREFULLY. The sensor rests on very light and thin shims that are critical for accurate focusing. If they are lost, broken, or bent, you’ll have a big problem on your hands. 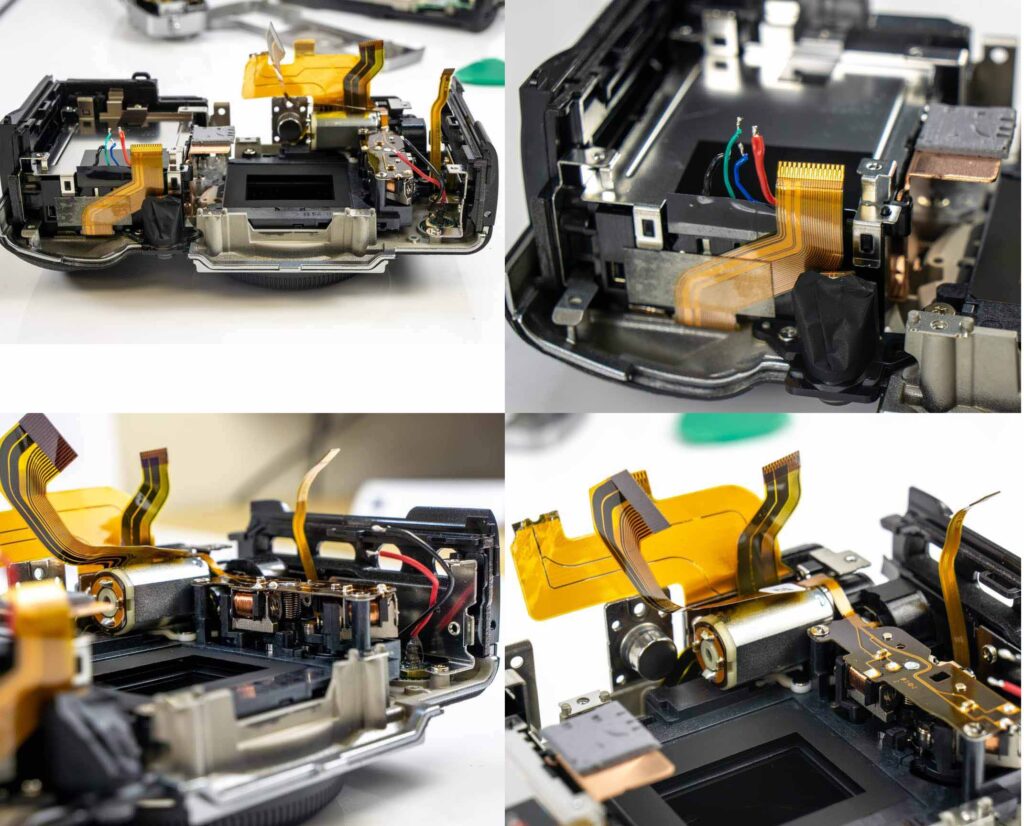 A more intimate look of what is left, including the shutter mechanism.

Finally, the sensor, one sensor that looks suspiciously similar to the one found in the X-H1, minus an IBIS shaker. Of course, we know this isn’t the same sensor. The X-T3 sensor weighs in at 26 megapixels of resolution, 2 more than the X-H1. The X-T3’s sensor is also a BSI (backside illuminated) CMOS sensor which should significantly boost its low-light performance. 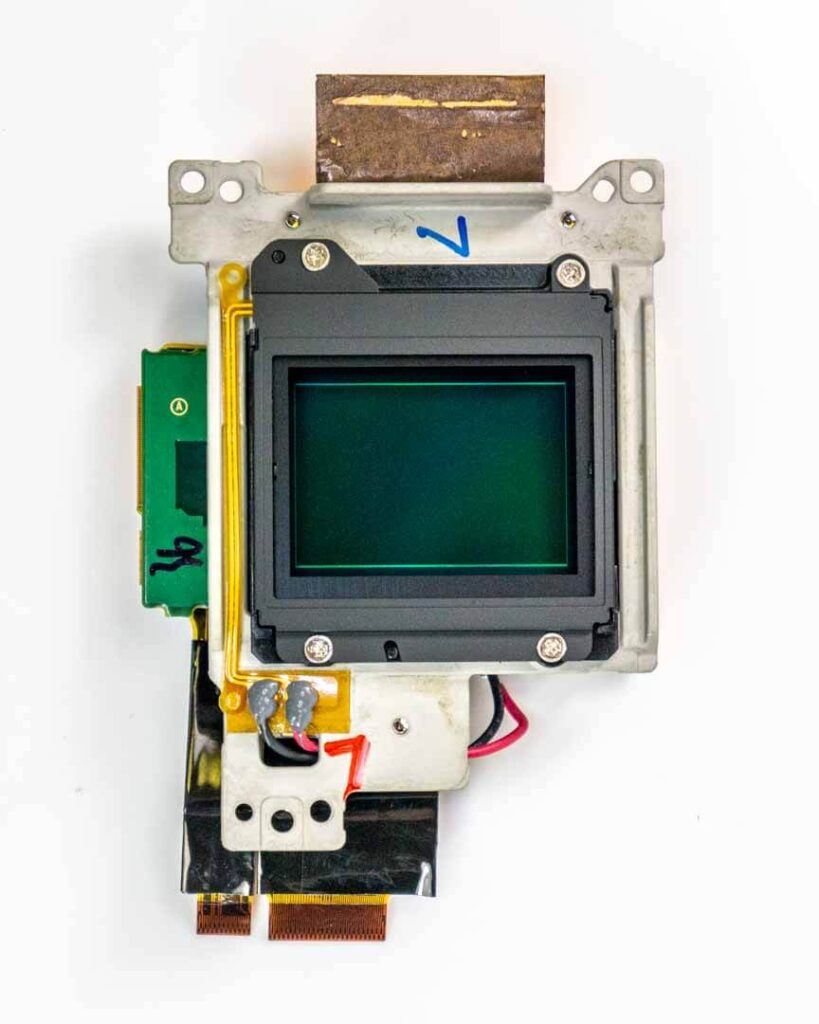 Fujifilm has always been a favorite within the infrared photography community and has been stealing the hearts of Nikon shooters ever since the XT-1 came out in 2014. Sorry Nikon Df, you just didn’t quite nail the look. When we put this little heartbreaker back together, it’ll be a full spectrum camera capable of detecting all the way from near Ultraviolet into Infrared beyond 1000nm. We’re looking forward to giving this one a full Infrared Photography review!