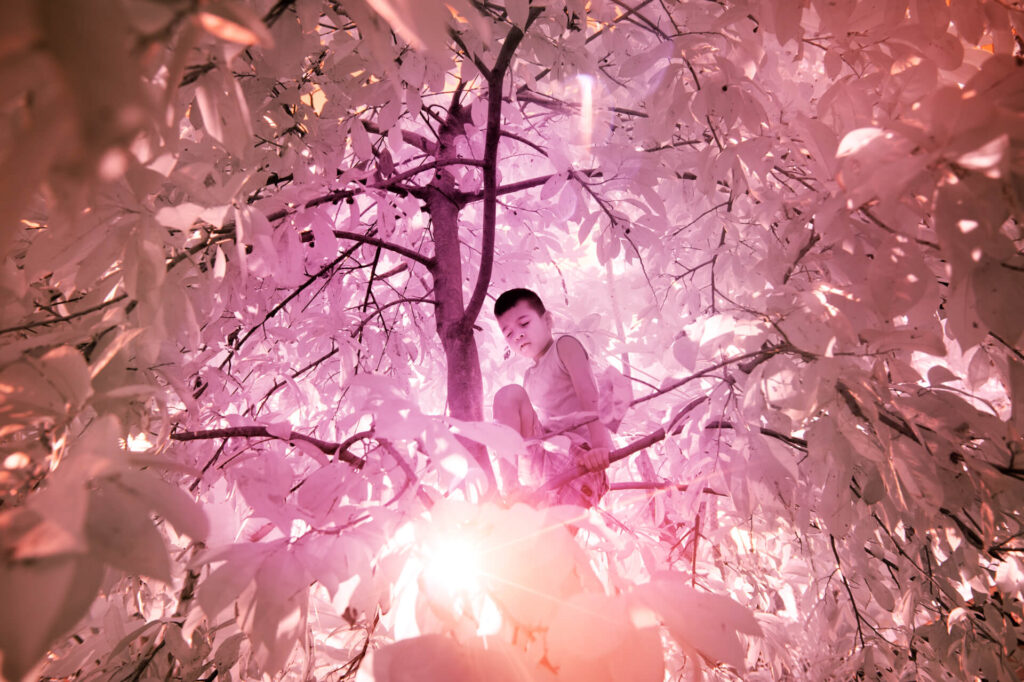 The Island of the Colorblind

In the late eighteenth century a catastrophic typhoon swept over Pingelap, a tiny atoll in the Pacific Ocean. One of the survivors, the king, carried the rare achromatopsia-gene that causes complete color blindness. The king went on to have many children and as time passed by, the hereditary condition affected the isolated community and most islanders started seeing the world in black and white.

Achromatopsia is characterized by extreme light sensitivity, poor vision, and the complete inability to distinguish colors. In Micronesia achromats adapt to their reduced level of visual functioning (due to lack of resources like sunglasses and tinted lenses) by using visual strategies such as blinking, squinting, shielding their eyes, or positioning themselves in relation to light sources.

Portraying the islanders that by their fellow Micronesians are referred to as ‘blind’ resulted in a conceptual selection of images that mask or empower their eyes, their face, or their ‘vision’ and invite the viewer to enter a dreamful world of colorful possibilities.

Color is just a word to those who cannot see it. If the colorblind people paint with their mind, how would they color the world, the trees, themselves? Daylight is too bright to bear, moonlight turns night into day. Flames light up in black and white, trees turn pink, a thousand shades of grey, a rainbow revisited.

Initiating my visual research in FSM, I tried to find ways to envision how people with achromatopsia see the world. I experimented with infrared photography, trying to see the island through their eyes. ‘The Island of the Colorblind’ consists of three kinds of images; ‘normal’ digital black and white photos, infrared images and photo-paintings. Together they are metaphorical attempts to visualize how the colorblind people see the world. I learned that the color the islanders say to ‘see’ or distinguish most is red. I photographed with a camera converted to infrared to re-invent color while shooting, creating an imaginary image of what the world could look like inside a colorblind mind. Next, I set up painting sessions; asked achromatopes to bring color back into the black & white images that I shot (referring to the coloring of B&W photos before color photography was invented). They said it felt like painting ‘blind’; they didn’t see the photo change.. This intimate color-experiment forced the achromatopes out of their comfort zone, reminding them of being confronted with the act of painting as a child and their first times facing the lack of color.

The picture paintings are part of the project as unique art pieces, involving the achromatic participants as artists; taking part in the work. At the same time it is another way of trying to fix their gaze and translate how they see the world. The images I shot in Micronesia function as a starting point for new achromatic imagery investigating color.

I am inspired by the role genetics play in the lives of people and how this shapes and affects communities. ‘The Island of the Colorblind’, tells the story of Pingelap and Pohnpei, islands with an extraordinary high percentage of achromatopsia (complete colorblindness) in Micronesia and ‘Samoa Kekea’ is about a Polynesian community with a high percentage of albinism in Samoa. I conduct visual research to explore these topics. The projects, as the subject, take different photographic forms (depending on the concept); varying from portraits to landscapes, abstract to documentary images, images shot by the subject, cooperative imagery, text and video, interactive installations… I use different mediums to translate the content of the work.

My work explores physical stereotyping in ‘Snow White’, a portrait series of people with albinism, where I seek to highlight the fragility and beauty of the condition and in ‘The Dwarf Empire’, a project set in China. ‘The Dwarf Empire’ or ‘The Kingdom of the Little People’, is a highly questionable fantasy theme park in Yunnan province and ‘home’ to 77 people with dwarfism it is the perfect embodiment of a modern ‘zoo humain’ and capitalist culture, the park being founded by a ‘tall’ businessman. The park combines entertainment with a level of ‘social care’. Twice a day, the residents sing for their supper to an audience of tourists. Simultaneously The Dwarf Empire could be seen as a moral tale of subjectivity – by Western standards the park is rejected and unethical, but by some of the residents described as a ‘paradise’.

I try to explore issues as voyeurism and the concept of otherness- the way we view people and what that ultimately says about us.

Sanne De Wilde (Belgium, 1987) explores the medium of photography and effectuates this in regards to subjects related to the role genetics, identity and perception play in people’s lives and how this shapes and affects communities and makes people vulnerable in the eye of society.
She graduated with a Master in the Fine Arts at KASK in Ghent (BE) with great honours in 2012. Her photo series ‘The Dwarf Empire’ was rewarded with the Photo Academy Award 2012 as well as the International Photography Award
Emergentes DST in 2013. Her series ‘Snow White’ was awarded 16ème Prix National Photographie Ouverte and NuWork Award for Photographic Excellence. She was awarded the Nikon Press Award in 2014 and 2016 for most promising young photographer. The British Journal of Photography selected De Wilde as one of ‘the best emerging talents from around the world’ in 2014 and she received the Firecracker Grant 2016, PHmuseum Women’s Grant and de Zilveren Camera award for ‘The Island of the Colorblind’.
‘Land of Ibeji’, her newest project with NOOR-member Bénédicte Kurzen, won the World Press Photo Award, Rovinj Photoaward, CAP Prize, Prix Voies OFF and was nominated for the ZEISS photography award in 2019.
She has been internationally published (Guardian, New Yorker, National Geographic, Le Monde, CNN, Vogue) and exhibited (Voies OFF, Tribeca Film Festival, Circulations, Lagos Photo, Lodz Fotofestiwal, Cortona On the Move, IDFA, STAM and EYE). Since 2013, De Wilde works with the Dutch newspaper and magazine De Volkskrant, in Amsterdam the Netherlands, and joined NOOR in 2017.
She is represented by East Wing Gallery (Doha, Qatar)

‘The Island of the Colorblind’

TIOTC is a project by Sanne De Wilde.