Image was taken in Li Tang of Gan Ze, Si Chuan Province of China. The scene impressed me as the normal man-to-do sheep shearing task were being accomplished by two Tibetan women. I felt a strong urge to press the camera shutter button so captured the moment and the memory did not fade even many […]

Image taken in Xi Lin Ge Le of Inner Mongolia of China. The rich dark soil contrasts the grassy hills, which became white under IR invisible light. The grayscale was also reflected in the tone of sky vs land. I endeavored to make best use of my infrared camera to depict lines and reflect tonal […]

The beautiful Yellow Mountain is a photographic spot and numerous B&B photos are also on the Net. However, it’s tranquil beauty perceived via IR camera is inexplicable, especially when the Mountain is in a veil of cloud. IR was my favourite genre of photography whenever I hike in Yellow Mountain.

In the Veil of Clouds

I have an immense fascination of the Yellow Mountain, and always enjoys my hiking&photo taking experience. The Mountain looks unique through lense on a IR camera, especially when its rocky peaks are veiled with clouds. This is one of the snapshots I took some years ago – an image denoting the mysterious side of the […]

Rocky Peaks Above the Clouds

The Yellow Mountain impressed me the most for the fact that it is not has high as the Himalayas of Asia, yet one can still breathe above the clouds, and so can the rocky peaks. I had a feeling of surrealism when capturing this image with IR camera, the clouds were under my feet and […]

The Yellow Mountain had numerous rocky stones that tourists deemed as impersonating certain features and behaviours of animals. The subject of my IR image was named as “Stony Monkey Overlooking the Sea of Rocks”. I intentionally shoot the image at this angle for not only an appropriate presentation of the natural stone structure, but also […]

Lost in the Mist

The image was taken during my one of my trips to the Yellow Mountain. I attempted to present the misty mountain scene as a piece of IR photographic work, which is rich its B&B tones as well as shades of grey, it has gradience when contrast is apparent.

The Yellow Mountain’s natural rocky peaks are famous, and are good subjects for IR photography. This image was taken during one of my hiking trips there. The rock features impressed me as they looked sharp in my IR camera, and shades of grey looked rich. I highly recommend anyone touring the Yellow Mountain to bring […]

A Panoramic View of Mount Shanqing

Mount Shanqing is a renowned Taoist sacred mountain, tourists hike up so to view steep peaks from the summit. I did that also as the image indicates. The awesome feeling I had when capturing panoramic view of Mount Shanqing still lingers in my mind, and thanks to my IR camera, that the surreal sense of […] 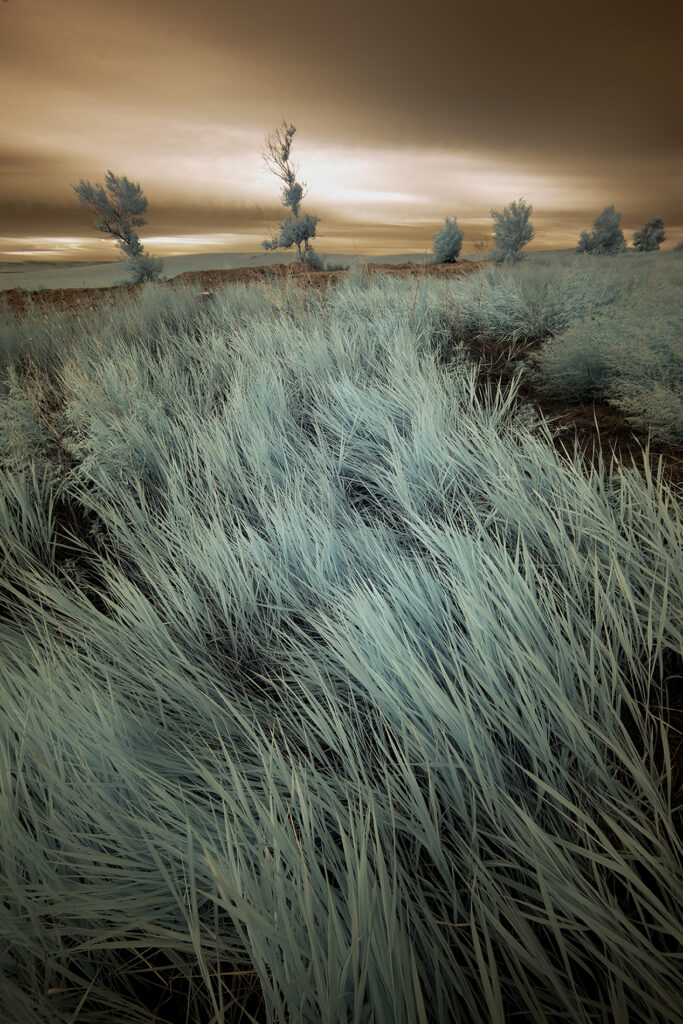 This image was an effort of mine to convey a sense of time and space, by depicting the overgrown grass in wilderness. A Touch of green and bluish tone was added which shows a different degree in luminance, hoping to enhance the contrast of vast wilderness vs tiny shrubs at the background. Color – IR […]

This is my photo essay with a series of my Color-IR photos, named as Infrared Illusion, hoping to convey a sense of dreamy and surreal mood in landscape, and hoping to share in our IR photography communities.

This is my photo essay with a series of my Color-IR photos, named as Infrared Illusion, hoping to convey a sense of dreamy and surreal mood in landscape, and hoping to share in our IR photography communities.