Infrared at the Oscars: Powered by Kolari Filters 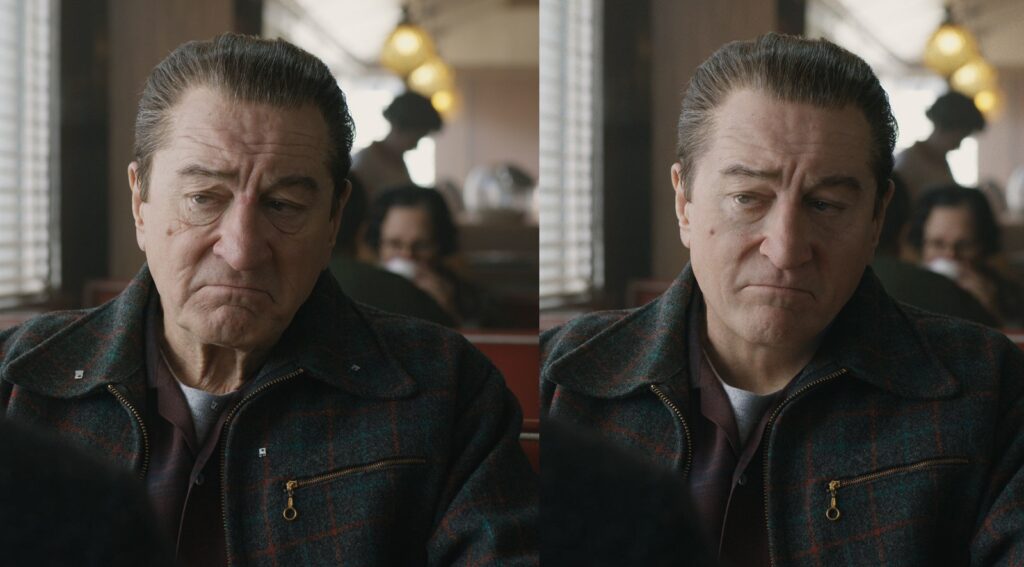 The task was to create a motion capture special effect that could de-age the cast decades, but it had to be done without tracking dots, facepaint, or spandex body suits. (Would you want to ask DeNiro, Pesci, or Paicno to wear a leotard?)

VFX Supervisor Pablo Helman pioneered a revolutionary infrared capture technique that provided a novel solution. Using paint that is only visible in the near-infrared spectrum, the team at Industrial Light and Magic was able to paint motion capture points on the actors that only IR sensitive cameras with Kolari Vision infrared filters were able to detect.

Specially modified infrared cameras, left and right, were used in a large 3 camera rig shooting infrared in multiple angles and enabling a detailed volumetric capture to be used for motion capture. Infrared shooting also has a feature of smoothing out facial features which would end up providing additional benefits for processing besides a stealthy capture.

When Lucasfilms reached out to us in 2017, we were naturally thrilled to be working with them. They had tried out a few of our IR lens filters when they were looking for the best optical quality IR filters to use for what would eventually become a 160 million dollar production. After they determined our filters would work for their application, they needed more in an impossibly short timeframe to use in additional angles. Kolari was there to sponsor the production with infrared lens filters and get the equipment on set to meet the rigorous production schedule of a film with a legendary cast including Robert Deniro, Al Pacino, and Joe Pesci and avoid filming delays.

Lucasfilms knew who to ask for production level equipment to satisfy Scorsese’s vision and complete their one-of-a-kind, three-headed camera rig. Here at Kolari, we’ve used invisible face paint before with ultraviolet photography cameras, but this was an exciting and totally new application of our cinema grade Infrared filter glass that we were thrilled to be a part of.

This ambitious, never before attempted effect created a believable and immersive experience, taking the audience seamlessly through time as the story is told. The Irishman is nominated for 10 Oscars, including Best Visual Effects for this incredible infrared de-aging achievement.